Remember, Oct. 9th Is Happy Cap A Commie Day!
"Don't shoot! I am Che Guevara and worth more to you alive than dead!"

As I've said many a time on this blog, it's amazing how two different stories fall out of the sky at the same time.

First, I have this gem, courtesy of Aunty Belle; 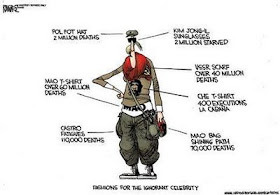 Then this excellent story from Ian Robinson of the Calgary Sun (Canada); (well worth the read)

A couple of years ago, I came across one of our website geeks in a hallway wearing a Che Guevara T-shirt. I'm a right-wing guy, but you wouldn't catch me wearing an Augusto Pinochet T-shirt. It's considered bad form among my people to promote mass murderers, but that's never stopped those on the left end of the spectrum.

I've seen young folks wearing gear with the image of Mao emblazoned on it, and he killed so many people he made Hitler look like a Quaker. I said to the guy: "You know, some people would consider your shirt offensive, given Che was a mass murderer. It's like wearing a Ted Bundy T-shirt."

He turned to me -- wearing the kind of patchy, testosterone-challenged beard that was Che's trademark -- and said: "Well, you can't make an omelette without breaking some eggs."

Wow. Nice to know who the moral imbeciles are.

Writing in Time magazine in 1999, another moral imbecile, the writer Ariel Dorfman penned the words: "By the time Ernesto Guevara, known to us as Che, was murdered in the jungles of Bolivia in October 1967, he was already a legend to my generation, not only in Latin America but also around the world."

The anniversary of the death of the Argentine doctor turned Cuban Communist revolutionary is Oct. 9. He continues to be a symbol of freedom and revolutionary fervour and purity for people who can't read or think.

Che was Fidel Castro's right-hand man. Despite the fact leftie morons from Pierre Trudeau to Michael Moore venerate the Cuban totalitarian state, it is just a prison masquerading as a nation.

After the revolution toppling the Batista regime, Castro put his buddy the doctor in charge of a prison to deal with the new enemies of the state. Cheerfully violating his Hippocratic oath -- he was a licensed physician -- Che said: "To send men to the firing squad, judicial proof is unnecessary ... These procedures are an archaic bourgeois detail. This is a revolution! And a revolutionary must become a cold killing machine motivated by pure hate! We must create the pedagogy of The Wall!"

The best scholarship available shows he approved or participated in the illegal executions of at least 200 people -- including a 14-year-old boy. Che was put in charge of turning Cuba into a modern industrial nation. He failed miserably, thus consigning Cuba to a future as a colony of the Soviet Union, exchanging sugar for fighter planes.

He then decided to take the Cuban revolution to the Congo. The U.S. understandably decided they couldn't have this moron loose in Africa and monitored his moves with electronic intelligence which they fed to local governments, with the result this patchy-bearded loser was sent packing with his tail between his legs.

Che then decided the time was ripe to foment revolution in Bolivia, despite the fact that nation had recently enacted all kinds of political change, including land reform in favour of the peasantry, who were as a consequence kindly disposed to their government, not to out-of-town murderers.

Che arrived in Bolivia with a small cadre of "revolutionaries" -- none of whom spoke the local language (d'oh!) -- and set up a base camp. His first casualties came when he took his men out on a training mission, became hopelessly lost (apparently, he couldn't read a compass or a map) and a couple of his men died crossing a river.

Tipped off by a local who didn't want these clowns roaming in his back yard, CIA-trained and funded Bolivian troops swooped down . Che, valiant hero of the Cuban revolution, was captured after shouting: "Don't shoot! I am Che Guevara and worth more to you alive than dead!" Brave fella. The guys who captured him decided he was too dangerous to keep around so they blew him away. And this martyr of the left was born.

But who was he really? A doctor who turned his back on healing to become a murderer. A sycophant to Castro, which was where he gained his only "success" in enslaving the Cuban people. From there on in, his legacy is that of the loser, who failed miserably at everything but murder.

And some of my favorite shirts for sale!